Impacting the Energy Performance of Buildings Directive
The revision of the Energy Performance of Buildings Directive (EPBD) started on 15th December 2021 with the publication of the proposition by the European Commission. The ITRE committee is leading, via its Rapporteur Ciarán Cuffe, to draft the EU Parliament’s position. The ENVI committee will provide an opinion.

Related information:
How can fire safety be included in the new EPBD?

Impacting the European Social Fund
As part of the Fit for 55 legislative package, the European Commission is proposing to extend emissions trading to the building and road transport sectors. Emissions from these sectors will not be covered by the existing EU ETS, but by a new, separate emissions trading system. To address any social impacts that arise from this new system, the European Commission launched the Social Climate Fund which is aimed at:  (1) financing temporary direct income support for vulnerable households and (2) supporting measures and investments that reduce emissions in road transport and buildings sectors and as a result reduce costs for vulnerable households, micro-enterprises and transport users.

The Forum for European Electrical Domestic Safety (FEEDS) and EuroFSA work together on fire and electrical safety. A strong link exists between safety and energy poverty as the poorest live in the leakiest and least fire safe buildings. For instance, as published in the ‘White Paper – Residential Electrical Safety. How to Ensure Progress’ the most degraded housings are the most likely to have obsolete electrical installations that pose a high fire risk: FEEDS has demonstrated that 30% of domestic fires and 50% of domestic accidental fires have an electrical source and that around 132 million European dwellings have obsolete electrical installations, this represents half of the building stock where vulnerable people in energy poverty are potentially living.

As fire discriminates, we strongly encourage to include the following safety amendments into the Social Climate Fund regulation. This will ensure a more consistent approach to prevent that investments addressing energy poverty are not leaving households into unsafe dwellings.

We, EuroFSA and FEEDS, strongly believe that tackling unsafe and inefficient buildings must be a priority in the EU and must be addressed into all relevant legislative processes. Following debates at the latest European Fire Safety Week, together with our members, we have developed concrete proposals to also address fire safety via the on-going recast of Energy Performance of Buildings Directive (EPBD) that will be debated later this year.

Impacting the Energy Efficiency Directive
In current version of the revised Energy Efficiency Directive, Member States are required to establish One-Stop-Shops. One-Stop-Shops will provide technical, administrative and financial advice and assistance on energy efficiency, energy renovations of buildings and the take-up of renewable energy. The text gives a special attention to other factors such as natural hazards, healthy indoor environment and safety issues (i.e. earthquakes, flooding, fire safety, inner air quality and health).

This is a great news as if One-Stop-Shop, being close to citizens and homeowners, ensure fire safety to be holistically considered (via preventative advice or installation of smoke alarms) when renovating a building, it gives an effective chance to increase the safety of citizens.

The energy transition
The European ‘Green Deal’ provides a road map with actions to boost the efficient use of the world’s natural resources. The energy transition, driven by the aspiration to fully decarbonize the energy system and the use of new technologies, reduces harmful pollution, potentially slowing and reversing global warming. One element of the Green Deal is supplying clean, affordable and secure energy. ‘Secure’ energy also implies safe energy, which confronts us with new challenges and risks concerning fire safety.

Electricity will play an even more dominant role in our homes and vehicles than today. The world energy usage is expected to increase by nearly 50% by 2050 and the estimated electrical consumption of a European household is expected to increase even faster. At the moment, it is estimated that electrical fires account for 20 to 30% of all fires in the residential environment. As such, the potential electrical hazards for fires will also increase. Here, the EU is not doing particularly well compared to some other countries. For example, the number of electrical fires per dwelling in the EU is 3 times higher than in the United States of America and 24 times higher than in Japan. 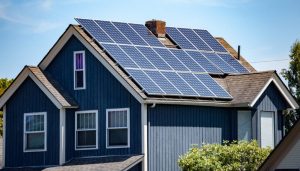 However, reducing carbon dioxide emissions necessitate building systems that use renewable energy sources as well as re-usable natural materials, i.e. a circular system. The current construction method is still a linear ‘take-make-waste’-system, using building materials made from the unrestrained use of natural materials. Buildings are being demolished and the materials are, for the greater part, discarded.
The energy transition therefore not only brings opportunities, but it also brings new risks and challenges. These risks and challenges emerge very quickly, most often faster than regulations can follow them. While many efforts are done to develop knowledge, tools and competencies to design more sustainable construction, we also need to invest in knowledge, tools and competencies to ensure the fire safety of modern constructions. Moreover, the issue of fire (safety) is most often neglected or misunderstood when considering circular construction. This is because all that is burned must be produced again and is, therefore, not circular. A fire therefore has a negative environmental impact on the air, soil and water.

What should we focus on?
It is of utmost importance that as, soon as possible, attention focusses on the fire safety aspects of the energy transition and the subsequent changes in construction and buildings that are already bringing new fire safety challenges. Subsequently, the upcoming innovations and changes in this field must be researched. Moreover, the renovation of existing buildings needs to be considered as an opportunity to check and ensure the fire safety of these buildings.

The energy transition aims for energy-neutral and fossil-free buildings, something which poses new fire safety risks. Due to their associated smoke development in case of fire (this problem is addressed in focus area 2). Nonetheless, with regards to fossil-free buildings, the focus should be on both the already known and the unknown risks that (among others) are caused by solar panels, heat pumps, energy-storage with lithium-ion batteries in buildings and homes and the use of hydrogen. The fire safety risks of electric vehicles lie mostly in the parking and recharging of vehicles in built-up areas, such as in parking garages, under carports and in-home parking.

Within circular construction, products and (natural) materials (such as wood, straw and hemp) are re-used wherever possible and residual waste is kept to a minimum. Wood is also increasingly being used as a construction material, even for high rise buildings. Furthermore, trees, grasses and mosses are being used on roofs and facades. However, these materials, are more flammable than the currently used materials. Therefore, fire safety should be an essential aspect of circular construction.

As soon as possible, building regulations need to become aligned with these developments as closely as possible while being both risk- and performance-based. The fire safety of buildings should be guaranteed by legislation. But, as already mentioned, almost per definition, legislation is running behind new developments and (technical) innovations.

The focus should be on increasing awareness, among governments, industry and users of the fire safety risks of the new forms of energy, such as solar panels, battery storage (building and neighbourhood level), hydrogen and heat pumps. This is the starting point to develop knowledge, tools and competencies to address these challenges. This also includes ensuring that people such as electricians possess modern competences. Furthermore, governments and the industry need more knowledge concerning the associated fire risks of the energy transition. This is also an important issue with regards to the new forms of transportation, such as vehicles using alternative sources which are parked in parking garages, under houses and in-home garages.