Our Focus » The growing vulnerable community

The growing vulnerable community
In Europe, there is a growing vulnerable community. In 2018, nearly 20% of the EU’s population was aged 65 or over . Moreover, life expectancy at birth is expected to increase 7.8 years for males and 6.6 years for females in the coming 50 years. This means that the EU is “turning increasingly grey” in the coming decades . Partially because the population is getting older, the number of Europeans with disabilities is also rising significantly. As a result, expectations are that this year there will be approximately 120 million Europeans with a disability . As such, the group of vulnerable people is getting increasingly bigger. 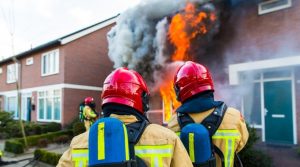 But what, and who, are vulnerable people? In other words: who need our special attention when it comes to fire safety? Due to their mental or physical state, vulnerable people have a bigger chance of causing a fire and/or have difficulty in escaping from their living environment in a timely and safe way in the event of a fire. Research into the relationship between vulnerable people and fire safety highlights a large number of risk groups . The most important ones are elderly people, disordered people, and people with a mental or physical disability. These type of people are considered particularly vulnerable if they live on their own. People with low social-economic status and people with a non-western migrant background are also considered more vulnerable to residential fires. Naturally, children always need to be considered when it comes to fire safety. Moreover, some of these vulnerable groups are also more likely to experience energy poverty. In conclusion, it is no surprise that people often say that ‘fire discriminates’.

What should we focus on?
When looking at which vulnerable groups are expected to grow the most in the coming years, and combining this with the opinion of the fire safety experts, it can be concluded that three main risk groups should receive the most attention in the coming years. These are the elderly (65+) living at home, (other) people with a mental or physical disability living at home, and children. We owe it to these vulnerable groups of citizens to provide them with a certain level of fire safety in their residential environment. One that does not allow these people to be at a significantly higher risk of being involved in a fire, or being at a higher risk of suffering the consequences of a fire.

It is difficult to underpin these findings with data as, within Europe, there are insufficient fire-related statistics available. However, research on 9 European countries commissioned by the European Fire Safety Alliance (EuroFSA), shows that over half of the people who die in a fire in the residential environment are people aged 65 or over . Moreover, burns are much more difficult to treat due to their older skin and elderly people are much more prone to the effects of inhaling smoke. When looking at countries that collect data on the mental or physical state of fatal casualties regarding fires in the residential environment, those people are also overrepresented in the statistics. Children are mostly at higher risk when living in single-parent families. However, children always need our special attention and care concerning safety, including fire safety.

If these findings are combined with the ageing population and the increase in people with a mental or physical disability living independently for a longer time, the conclusion can easily be drawn that if nothing is done, the number of fire casualties among these groups will increase rapidly in the coming years. For these groups and children, doing nothing is not an option.

How can we improve the fire safety of the growing vulnerable community?
To be able to make effective interventions to improve the fire safety of the previously mentioned risk groups, we need to know what the risk factors are. After all, if these risk factors are known, we also know what any interventions should be focussed on to improve fire safety. Sufficient international research is available to identify these risk factors. Among others, this research shows that a distinction can be made between factors that we can influence (such as the type of housing certain people live in, fire prevention resources and the use resources) and factors that cannot be influenced (such as age-related ailments, illness and social and economic status) . Particular attention must therefore be paid to those factors that can be influenced.

Improvements in fire safety have to be based on some important findings. First, when it comes to the elderly and people with disabilities, fire often starts close to their body (for example the chair they are sitting in or the bed they are lying in). Due to these people’s reduced self-reliance, it is important to act quickly. When looking at the possible (layers of) building fire safety measurements and related to these vulnerable risk groups, the prevention of fire breaking out and the rapid automatic extinguishing of any fire are essential. The early detection of a fire is only effective if the alerted persons are also able to escape independently and on time.

These measurements can be realised through a combination of influencing fire-safe behaviour, initiating the application of technical provisions, such as early detection and automatic extinguishing, and implementing building regulations that fit the requirements of the (vulnerable) risk groups. However, to be effective, these three tracks must be realised together. Only taking one or two of these measurements will not lead to a satisfactory result.